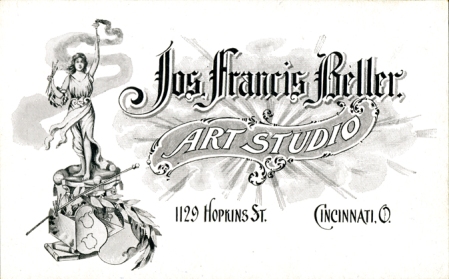 This one’s for all you Cincinnati trivia buffs. I was recently contacted by a woman who wrote, “My great-grandfather worked as a commercial artist for the company who built the Dixie Terminal. He worked on gold-leafing the cherubs on the ceiling.” A-ha! So, Joseph Francis Beller was the man [at least partly] responsible for those frolicking cherubs I’d mentioned in my post on the Dixie Terminal interior. Beller was also a studio photographer. He photographed the National Elks Lodge parade in NYC, and those images were published in a book. Unfortunately, he died while his children were still young, and not much more is known about him, except that he did have a rather swanky business card.