The Marines’ Memorial Club by Bliss & Faville is located at 609 Sutter St. in San Francisco’s Union Square neighborhood. The 12-story Beaux-Arts-style building was built in 1926 as the Western Women’s Club and was purchased by the Marines’ Memorial Association in 1946.
END_OF_DOCUMENT_TOKEN_TO_BE_REPLACED

Historic Brewery Demo ‘Would Be a Terrible Loss’: the Bavarian Brewing Co. in Covington, KY is at risk.

Businesses Get Custom Made Signs: Cincinnati’s CoSign works its magic on Covington businesses.

Put Back the Hole into the Fence on the Davis Sq. Bike Path: in my old stomping ground of Cambridge, MA, a petition to break something that was recently fixed, as well as the city’s response.

Federal Judge Rules Detroit Residents Have No “fundamental right” to Water: sliding toward the Third World, I guess.

‘Hi, Do You Have Water?’ In Central Calif., the Answer Is Often No: more on water.

Silicon Valley’s Newest Dating App Is ‘Tinder Without the Poor People’: also from California, “With the rise of high-speed digital dating, it’s about time somebody introduced a filter to weed out low-income prospects by neighborhood.”

Notes for Things to Not Forget: a lovely read from Walkers in the City.

Built in 1931, the gorgeous Art Deco Omaha Union Station by LA-based architect Gilbert Stanley Underwood is located at 801 South 10th St. It now houses the Durham Museum. But we don’t care about that; we just want to ogle the interior!
END_OF_DOCUMENT_TOKEN_TO_BE_REPLACED

I’m honored to be included in the book The Designer As… Author, Producer, Activist, Entrepreneur, Curator and Collaborator: New Models for Communicating, written by Steven McCarthy and designed by Martin Venezky/Appetite Engineers.
END_OF_DOCUMENT_TOKEN_TO_BE_REPLACED

Located at 919 Broadway, the Frist Center for the Visual Arts in Nashville began its life as the Main Post Office, designed in the Art Deco style by Marr & Holman and constructed in 1933-34.
END_OF_DOCUMENT_TOKEN_TO_BE_REPLACED

ArtWorks’ Muralworks Walking Tour: tomorrow at noon, learn about the process and history of ArtWorks’ murals along Central Parkway.

A Wall in East Harlem with Something to Tell You: The Spirit of East Harlem by Hank Prussing chronicles the domino players, musicians, mothers, and playground denizens of the neighborhood during the 1970s.

Somerville Mayor Challenges Cambridge to ‘Interesting City’ Throwdown: “When did Cambridge become Natick? And when does Harvard Square officially change its name to The Cambridge Collection?”

Map of Metal: just that.

As promised, here is one of the awesome public art projects in the Detroit People Mover Financial District station. “D” for Detroit by Joyce Kozloff is a large-scale tile mural inspired by motifs in the Fisher Building, the Guardian Building and Diego Rivera Court in the Detroit Institute of Arts.
END_OF_DOCUMENT_TOKEN_TO_BE_REPLACED 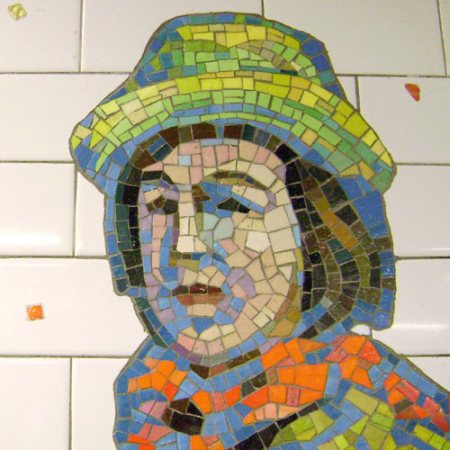 Artist and educator Jane Dickson was born in Chicago, educated in Paris, Boston and Cambridge, and now lives and works in New York City. Her public art project The Revelers is located in the Times Square/42nd Street subway station and consists of 70 life-size figures made of brightly colored glass mosaic.
END_OF_DOCUMENT_TOKEN_TO_BE_REPLACED

Cambridge Parking Tickets Get Yogic Redesign: “Getting a parking ticket usually just stresses you out. But maybe it doesn’t have to. Maybe it’s even an opportunity for some existential reflection.”

Spheres of Influence: how do people identify their communities apart from arbitrary political boundaries?

Museum for Rescued Letters: Berlin has its own version of the American Sign Museum.

Enjoy Your Weekend: whether you feel like being a jock or a sloth this weekend, we’ve got your covered with a variety of event options.

Food Among the Ruins: “Detroit, the country’s most depressed metropolis, has zero produce-carrying grocery chains. It also has open land, fertile soil, ample water, and the ingredients to reinvent itself from Motor City to urban farm.”

Paris’ Dog House Is Damn Comfortable!: “The two floor dog house has a clay-tile roof with copper gutters, intricate ceiling molding and a crystal chandelier hanging in the bedroom complete with central air.” Shut. Up.

Japanese Map of America: apparently, there are a few details they got wrong.

Lettering in Cambridge: some of the best lettering and signage that can be found in Cambridge is assembled here.

Architects: As seen on TV!: LOL!