Happy 100th birthday, Grand Central Terminal! Since 1913, this has been one of the most famous buildings in NYC and, according to Travel + Leisure, it is now “the world’s number six most visited tourist attraction,” attracting more than 20 million visitors each year.

McKim, Mead & White designed the colossal gateway, part of which is shown above.

The well-connected firm of Reed & Stern won the architectural competition to design the terminal but, in a stunning example of nepotism trumping nepotism, the even better-connected firm of Warren & Wetmore was added to the design team [for more details and drama, check out The Birth of Grand Central Terminal].

The Beaux Arts building includes 67 tracks as well as shops, restaurants and the Grand Central Market.

The ornate details in the Main Concourse are reminiscent of the train station in Harry Potter. 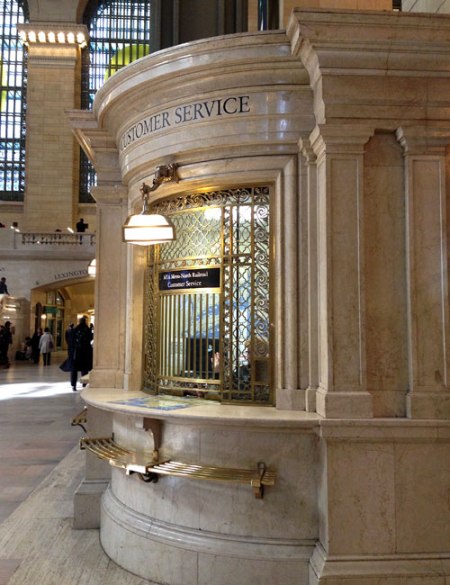 In the center of the Main Concourse is the information booth, topped by a large, four-faced clock made of brass and milk glass [widely speculated to be opal, but it’s not].

The windows in this cavernous space originally let in much more light, before tall buildings surrounded Grand Central.

The celestial ceiling was conceived by Whitney Warren [one of the four primary architects] and French artist Paul César Helleu. In this design, the stars are slightly displaced and, more importantly, everything is backwards, supposedly to depict God’s view of the heavens [although that would be from above, not below; duh]. 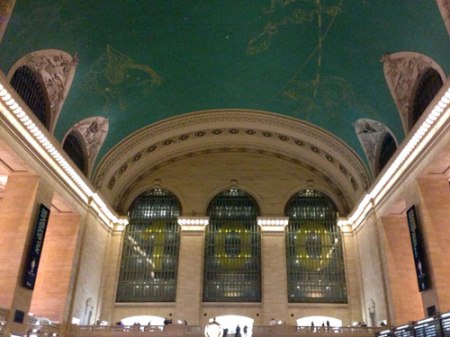 Check out the lovely Guastavino tile outside the famous Oyster Bar in the Terminal:

The decorative details shown above and below are the work of Cincinnati’s own Rookwood Pottery:

For more details on the rich history of this grandiose building, go here, here and here.