Located on the grounds of the St. Bernard Abbey in the small town of Cullman, AL, the Ave Maria Grotto is an installation of over 125 miniature buildings, mostly Catholic cathedrals and monasteries, with a few secular structures [like the Leaning Tower of Pisa and the Alamo].

Brother Joseph Zoettl was born in Landshut, Bavaria in 1878 and came to this Benedictine Abbey in 1892. He spent more than 40 years on his project using crushed marble, bathroom tile, broken costume jewelry, marbles, shells, and other small objects, many sent to him by fans of his work.

Because Zoettl had seen very few of these buildings in person, he relied on postcards and other reference materials, resulting in distortions and some speculative construction details. He constructed his last replica in 1958 [the Basilica in Lourdes, shown above] and passed away three years later.

The perspective and relative sizes are skewed in a way that doesn’t seem problematic, since these buildings are actually located all over the world and are of different ages, materials and architectural styles. Somehow the wonky mismatches work well together. St. Peter’s Basilica in Rome is seen in the foreground:

In the foreground, the Mission San Juan Capistrano in California: 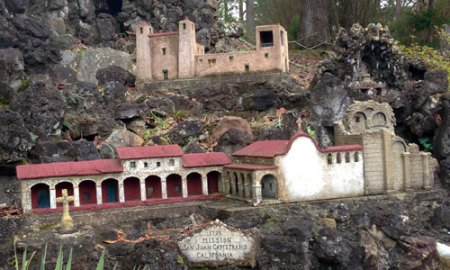 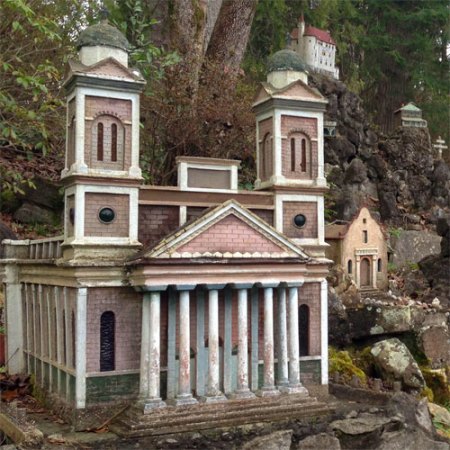 This central cave is the Ave Maria Grotto. In 1933, as Zoettl was planning it, a freight car full of marble derailed nearby, and the resulting crushed marble was useless to its owner, so it was donated to the Abbey and used to form the stalactites: 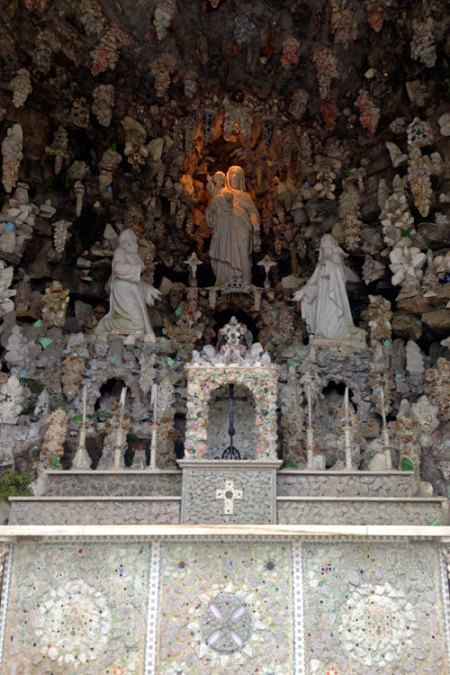 There’s a path through the installation, which allows up-close inspection of many of the structures. Stepping away, the density and over all scale of this landscape become apparent. 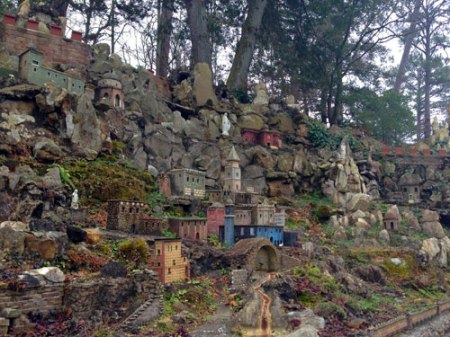 According to Roadside America, Leo Schwaiger, after working alongside Zoettl for many years, now takes care of various repairs, and the grotto even includes his own, more recent miniatures. He must be responsible for the Basilica of Jasna Góra in Częstochowa, Poland, which dates to 2009:

This is a quiet and contemplative place. On a misty morning, the Ave Maria Grotto possessed all the gravitas of a sacred place. Even our tour guide was silent in front of Jerusalem’s Antonia Fortress:

Although I was raised Catholic, nowadays I’m your garden variety smug atheist. I rarely consider religion and, when I do, my feelings range from apathy to dislike. This is fanciful outsider art, at once naive and masterful, but it was a labor of love in the name of God, and the installation is a physical manifestation of a deep spiritual commitment, coupled with a fair amount of obsessive tinkering. Although I don’t share Brother Zoettl’s beliefs, his obsessive body of work is awe-inspiring.

A special thanks to our friends at Once Blind Studios for suggesting that we visit this place!