Born in Houston, TX, the artist Charles Mary Kubricht now divides her time between Texas and New York. Her recent installation, Alive-nesses: Proposal for Adaptation, is on long-term view on the High Line right at West 30th St.

Three storage containers have been painted with razzle dazzle, a type of camouflage made up of complex geometric patterns, interrupting and intersecting each other, which was used extensively on ships during WWI. Instead of concealing, it confuses the eye, making it difficult to understand the ship type, speed and direction of travel, thus having the effect of hiding a potential target in plain sight.

Painting the camouflage onto these shipping containers is a reference to their location near the Hudson River’s waterfront. According to the artist, “The visual effect disorients the viewer by reorganizing the form of the containers.” I disagree: the installation is located at the northern terminus of the park, and the viewer’s static perspective, set against the vertical and horizontal lines of nearby buildings, actually has the effect of clarifying these forms.

Kubricht isn’t the only contemporary artist to use razzle dazzle in her work; Matt W. Moore’s XYZ Axis, a mural in the Over-the-Rhine neighborhood of Cincinnati, is another example: 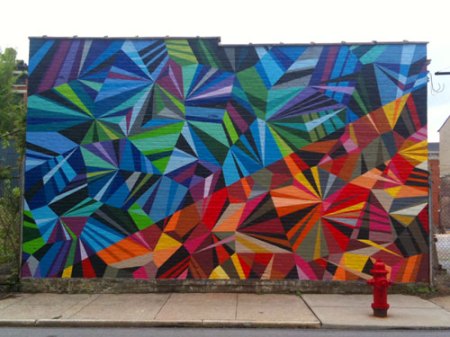