To mark the end of the year, I’m starting up something new — my favorite VL posts of the year, starting with 2008, when I began this blog. Not the most popular posts, and not necessarily your favorites, but some of the most amazing discoveries and experiences I had in a given year.

Above is a beautiful public sculpture entitled Reclamation by Lesley Baker in Indianapolis, located just a hop and a skip from where I lived a decade ago.

I spent 2008 reeling from the corporate job I’d just quit. I was broke and feeling lost, and I started this blog as a kind of digital scrapbook, to record my inspiration. Over time, maintaining this blog also encouraged me to keep finding inspiration, so it really helped me look more closely at my environment.

I was determined to get to know the Cincinnati metro area better, including the incredible Carnegie Visual and Performing Arts Center in Covington, KY:

A walking tour of downtown Cincinnati surveillance cameras yielded a fresh perspective on that neighborhood:

I checked out lots of free things on foot. Downtown Cincinnati’s Dixie Terminal is so awesome that it got three posts — the Rookwood-designed outside facade:

The arcade [featured in Rainman]:

And another look at the arcade:

The awesome Charley Harper mural in the Federal Building is still one of my favorite hidden art gems:

We watched the fireworks from Clifton’s Bellevue Hill Park, which has an amazing Googie pavilion:

One of our architectural muses is the Germania Building in Over-the-Rhine, which we documented extensively, including its various details in our own work:

My first visit to Memorial Hall in Over-the-Rhine yielded tons of photos of great architectural details: 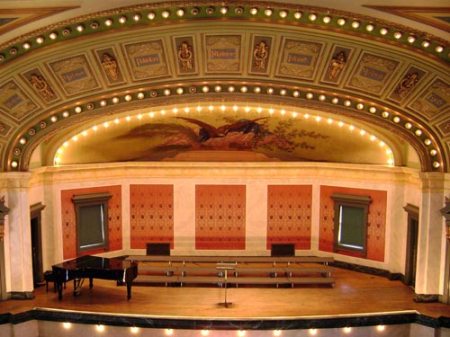 Scott Donaldson painted the mural Campy Washington in the Camp Washington neighborhood of Cincinnati. This is still one of my favorite ArtWorks murals:

Stay tuned every Monday this month as I go through the archive and pick out my favorite posts from each year.