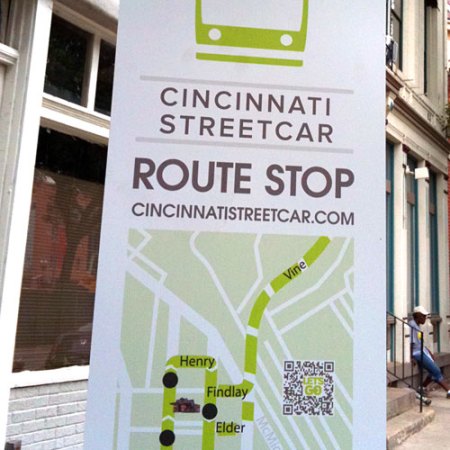 As a matter to general principle, I’m always pro-transit. Honestly, though? These snazzy new streetcar signs [complete with QR codes!] are a funny sight in a city whose actual transit system could use serious design help. I know the funding is coming from a different source, yadda yadda, but this is a bit redonc to see.

When we first moved here five years ago, Metro bus stops were designated by faded paint stripes on utility poles. This has been slowly replaced by actual signage, which is helpful [well, except for the outskirts of the city, which still feature paint stripes for bus stops that no longer exist, and some stops with no signage]. The route maps were and are confusing, and only work if you’re already familiar with the city’s layout and major arteries.

The system in general is so frustrating. Drivers don’t advise on transfers. They run red lights, and don’t stop for passengers. There was one time when my driver stopped mid-route and went to McDonald’s, while the passengers waited for her to finish her lunch. Oh, I only ended up being 30 minutes late to my destination. Buses do or don’t come on time, seemingly without any accountability. There seems to be a “transit of last resort” culture surrounding the bus system, which means that quality of service is not necessarily important. [I have to mention that my comments ignore the positive experiences I have had, just to make a point.]

We moved to Cincinnati from Boston, and the MBTA has a “customer bill rights” and a “write to the top” policy [I wrote to the top several times, and my questions were always thoughtfully answered by senior officials].

So, here we are, with sleek new maps for a system that doesn’t exist, in a city whose public transportation could use a ton of help, starting with more sleek information design. Hmm.