Completed in 1908, the Westcott House in Springfield was Frank Lloyd Wright’s first residential commission in Ohio. It’s both a prime example of his Prairie Style of architecture, and evidence of the inspiration he drew from a trip to Japan.

In the early 1940s, the house was converted into apartments. By the time it was “rediscovered” a decade ago, the structure had been abandoned and many of its period details were missing. A complete restoration stabilized the buildings and returned them to Wright’s original vision, including reproductions of furniture and lighting present in the original plans.

This is the view from East High St., showing one of the massive urn planters and a sizable front patio, all slightly elevated above street level:

The entrance is actually around the corner and looks fairly modest:

Interior photography isn’t allowed, but I managed to sneak in a couple of photos:

This dining room suite features built-in light fixtures on the corners of an expandable table. It’s a painstaking reproduction of the original designed by Wright for this space: 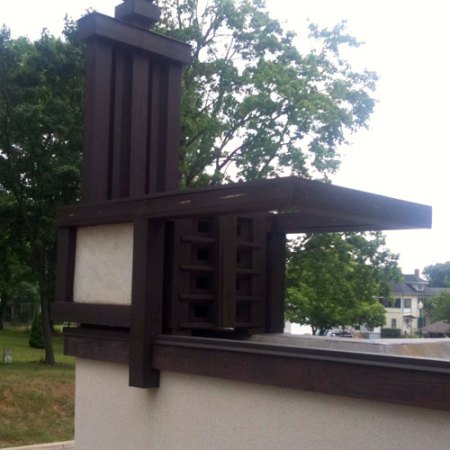 Behind the house is a garden and a garage. Everything is elevated above the street and enclosed with a pergola and a Japanese-inspired trellis, giving it the feel of an insulated compound:

The garden has been recreated based on Wright’s original plot plan using period-appropriate plantings:

I very much admire both Wright’s architecture and his philosophy, and his Prairie concept is distinctly American, drawing its formal inspiration from this land, and remaining subordinate to the Midwestern landscape. The pulling together of different cultural influences [in this case, primarily Japanese] feels very American as well.

But, there is at times something heavy-handed in Wright’s choices, as though his need for a holistic vision trumped the need for livable dwelling. This home features extensive closets and built-ins, surely in response to client needs. But, it also features cantilevered windows that serve to visually extend the low-slung external appearance of the house, but seem to serve no interior need.

The most thoughtful aspect of the home is its simple, slight elevation. At eye level, standing in the great room, the street cannot be seen at all, even though the home is built almost right to the sidewalk. Inside, the ceilings are fairly low [8 feet] and are further lowered through Wright’s use of a crown molding-type element about a foot below the ceiling. On the main level, the open space is divided with partial walls into a great room/library, living room, and dining room. The partitions divide up a large space into three intimate areas while allowing for air flow and an open feel.

In many ways, this is a thoughtful design that can inspire us today, and the hour-long guided tour is well worth it.