I got this shirt at my first show, back in the 8th grade. If you ever see me wearing it, that means it’s laundry day. In fact, last summer, I got accosted by a metalhead-looking guy in the parking lot of Krappy Kroger in Over-the-Rhine, Cincinnati. He wanted to know where I’d gotten it. “Ugh, there.” Where else? Hot Topic? Anyhoo, I’m going to take a rare walk down memory lane and tell you a bit about this place.

L’Amour [pronounced “Lamorz” by those in the know] opened as a disco club in 1978. In the early 80s, it transitioned into a rock and heavy metal club, hosting pretty much every band that mattered [and plenty that didn’t] from hair metal to thrash to hardcore. It was to the late 80s and early 90s what CBGB had been to the 70s and early 80s. It closed in 2004.

My first show was Yngwie Malmsteen. Yngwie who? Yngwie J. Fucking Malmsteen, that’s who. [That’s what the shirts said.] A few months later, I saw Biohazard at L’Amour. They had just played Battle of the Bands at South Shore, my soon-to-be high school.

Starting in 9th grade, the shows became more frequent — Murphy’s Law, Circus of Power, Type O Negative [during their brief moment as Repulsion], Overkill, Mucky Pup, Exodus, Faith No More. For a while, I was there every weekend. I was a L’Amouron. It didn’t matter who was playing; I loved the scene. Here is Life of Agony, who also went to my high school, performing at L’Amour: 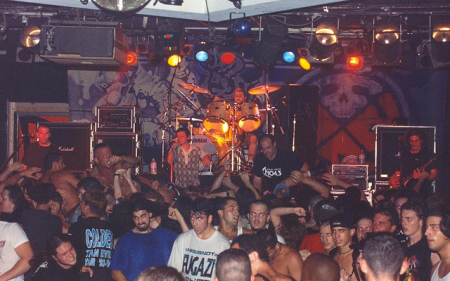 I hated high school. I was in the honors program with a bunch of nerds and nouveau riche JAPs and guidos from Mill Basin and Bergen Beach. My family lived in the projects across the street from South Shore. I had a few school friends, but my world was mostly outside of school. I spent a lot of time with metalheads who were a bit older, some studying at Brooklyn College or Kingsborough Community College, some just working. It was a community for whom my grades or where I lived didn’t matter. 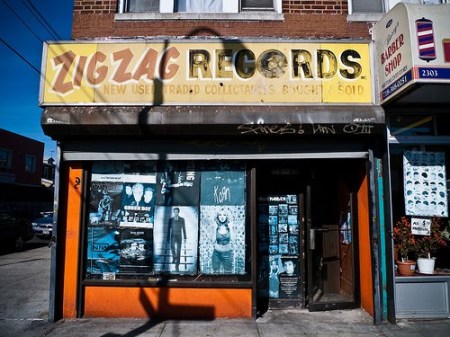 By 10th grade, I had graduated from babysitting for neighbors to ghost-writing papers for my college friends. I thought they were cooler, but I was starting to suspect that I was smarter.

Our radio station of choice was WSOU, the metal station out of Seton Hall University [my favorite DJ was Al Mancini]. I also discovered WNYU and WDRE, which exposed me to the Screaming Trees, Nitzer Ebb, Siouxsie and the Banshees, Nine Inch Nails. I had a subscription to Spin Magazine because my stepfather worked there, which introduced me to bands on Sub Pop, Alternative Tentacles, and SST. I ordered the cassette of Nirvana’s Bleach just on the strength of the review. It was life-changing.

My metal friends and I spent our afternoons on the project benches or on the roofs of our buildings. I watched the guys play hackey sack and street hockey, or tagged along to band practice. We drank wine coolers in the tunnels in Riis Park and spent hours in diners — the Arch, KPD, the Floridian. Sometimes we went cruising through Canarsie in my friend’s 79 Monte Carlo. 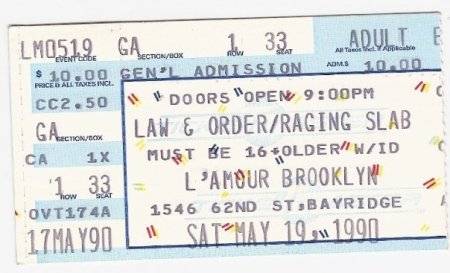 During 11th grade, a schism started to develop. I still hung out at L’Amour and Zig Zag Records, but increasingly at other clubs in “the city” — Limelight, Ritz, Marquee, Roseland, and CBGB, where I met Joey Ramone [and was so flabbergasted that I called him “sir”]. I wore vintage dresses from Domsey’s. I started spending more time on St. Marks Place, harboring a little crush on a burgundy-haired guy who worked at Ian’s. One day, a woman interviewed my friend and me and took some photos of our outfits. A few months later, I saw her on “60 Minutes” — she was a trend spotter, working for clients like Coke and Nike.

At this point, my hair was almost down to my waist, dyed jet black. The art program at my school had been cut, so I took photography, fashion illustration and silversmithing with the vo-tech kids. One day in silversmithing, my hair fell into the flame of the Bunsen burner. I was fine, but a huge chunk of my metal mane was missing, so I got my hair chopped into a cute little bob. Everyone knows that a metalhead’s long hair is at least as important as the ubiquitous MC, and mine was suddenly gone. In a way, that eased the transition, trading in lycra for flannel, cowboy boots for army boots.

I probably didn’t know the word at the time, but the misogyny of the metal scene had started to get to me. I was looking for direction, for role models. Dressing like a groupie was sort of lame since I had no groupie intent. Dressing weird and artsy seemed more fun and expressive. I started spending more time with people my age — college-bound high school students who were aspiring artists, New Wave kids, graf boys, vegetarians, feminists.

I volunteered on Earth Day and did some writing for a local music publication. My friends and I tried to start a recycling program at our school. I got involved with NOW. I started listening to Babes in Toyland, PJ Harvey, Bikini Kill. It was cool to see chicks rocking out on their own terms. I became increasingly obsessed with getting the hell out of Brooklyn.

After the Rodney King riots touched my cursed corner of Brooklyn, I couldn’t wait to leave, and my acceptance letter to Cornell was the long-awaited salvation. People seemed surprised that, for all my posturing, I had been a nerd all along. This video for “Bruise Violet” by Babes in Toyland was shot at CB’s a few days before I left for college. My family didn’t have a car, so one of my metalhead friends drove me to Ithaca in his mom’s station wagon. My legs were still bruised from this show, and I fretted about being perceived as ghetto trash. 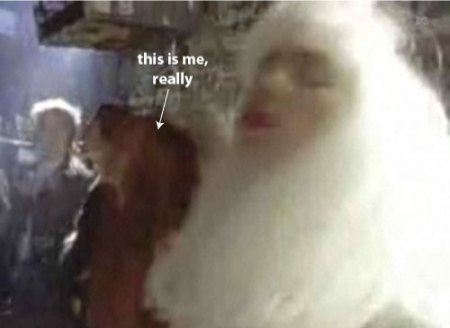 Once I got to Cornell, what struck me was not so much everyone else’s superior education [which I had assumed, and which was mostly true] as their wide-eyed curiosity. My schoolmates were excited about their sudden freedom; I felt world-weary. I had already witnessed a few lives going nowhere or spiraling out of control and had lost a friend to an overdose. I was excited to finally be able to focus on studying.

People express shock sometimes at the fact that I’ve left NYC. I find it surprising that everyone’s hometown isn’t poisoned in their minds. My New York isn’t a tourist destination or a movie set. It’s not even a famously bad ‘hood. If it weren’t for Ill Bill, Glenwood Projects wouldn’t even be on the pop culture map at all.

It’s taken me a while to come to terms with BK. At first, I was self-conscious about being a product of that place, and it took years for me to finally feel like my own person. In some ways, I am and will always be ghetto trash. I don’t glorify the experiences I’ve had, but I try to own them without nostalgia. I still think about “going home” and it’s hard to accept that, right now, my home is here in Cincinnati.

I remember reading about the closing of L’Amour — we were living in Boston, and I was teaching at an art college. My mind was far away from that place. This ratty club in Brooklyn with its impassioned bridge-and-tunnel scene, which had featured bands that sold out larger venues just across the river, seemed sort of quaint to me. I was surprised that it hadn’t closed years before.

It turns out that there’s a book in the works. It’s being put together by long-time L’Amour DJ Alex Kayne and will feature photos and other memorabilia. Here he is, discussing his book project on “Late Night with Johnny P” [worthwhile for the accent alone].

UPDATE: To add to this little archive, here’s a photo of me wearing that same L’Amour shirt circa 1987. Note the peacock bangs:

If anyone is looking for this shirt now, you can get a bootleg via Cafe Press. It’s not the same, but it’s close: 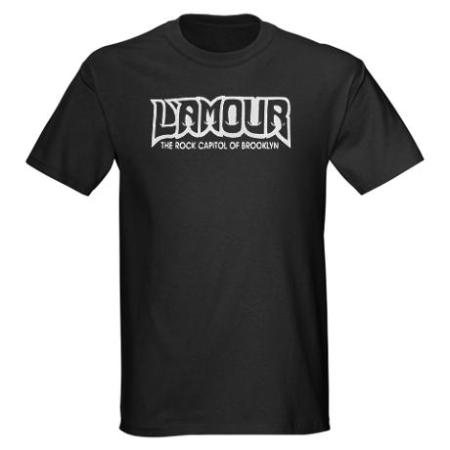 Dabbling in biker chic circa 1990, resplendent in my L’Amour 10th anniversary shirt, which I hand-colored with fabric markers:

Leslie submitted this photo of her WSOU shirt: