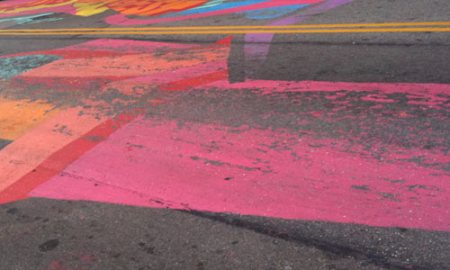 Much has already been said about Paint the Street, the art project on 12th St. in Over-the-Rhine that was recently completed by artists Pam Kravetz, Carla Lamb, Karen Saunders, Matthew Dayler, and Danny Babcock, along with 1,500 volunteers, and executed under the direction of ArtsWave [formerly the Fine Arts Fund]. I didn’t participate in the painting, but I’ve been watching this project from the initial call for participants through the state of the painted street now.

Here’s the kind of photo you may have seen of the volunteers working on the painting; this is from the ArtsWave Facebook page: 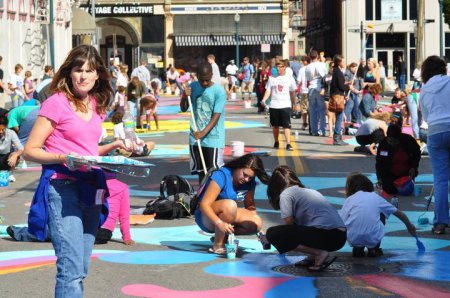 Or, you may have seen a dramatic bird’s eye view of a large section of 12th St.; this photo is by Scott Beseler, published on Wooster Collective:

But, what does it look like from the day-to-day point of view of a neighborhood resident? Here’s a pedestrian’s view of the intersection of 12th and Race: 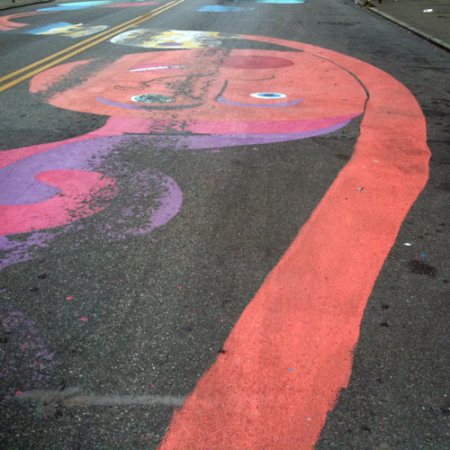 I took these photos less than a week after the painting spectacle took place. In fact, last Monday morning, just over 12 hours after the end of the event, the paint had started to seriously erode in parts. A week later, the painting already has the faded, degraded patina of an old ghost sign. The primitive figures and scattered words are becoming less recognizable. From my vantage point as a pedestrian on 12th St., this painting has the visual impact of the messy aftermath of a kid’s birthday party, with the clutter of shredded streamers and deflated balloons that still need to be picked up. 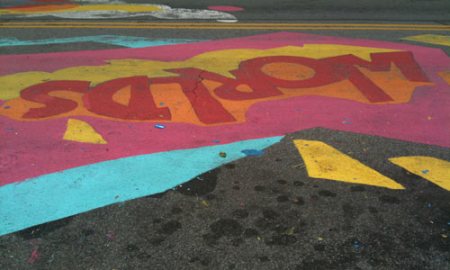 Just to back up a bit, if you’ve been reading this blog, you know that I’m biased toward visual expression. In my book, art is always better than no art, and I try to find and document interesting examples of visual inspiration wherever I find it, whether they be murals, ghost signs, architectural ornament or, sometimes, street art. Since I currently live here, I’m always especially curious about anything artistic that happens in Cincinnati.

So, Paint the Street is a kind of paint-by-numbers large-scale painting spanning 12th St. from Main to Central Parkway. There was community input into the design, which features a saturated palette, happy faces, balloons, and inspiring phrases.

Based on everyone I’ve talked to, and all the online accounts I’ve read of the day-long painting experience, that was definitely a success. People had fun painting with their kids, friends, and neighbors, and enjoyed being part of this community-wide activity. The project has been covered in the local press and beyond, and its timing dovetailed perfectly with the Fine Arts Fund’s change of name and mission. So, as a large-scale art “prank,” it was enjoyable and got a lot of media attention for ArtsWave, for Cincinnati, and hopefully for OTR and the many other cultural entities within it. It seems to have achieved those goals.

But as a semi-permanent art project that now lives a life within a community? Not so much. What do these candy-colored forms really communicate? What is the purpose of figurative elements that can really only be understood from a high vantage point? How is this to be experienced? Who is the audience for this project?

Since I’m a designer and always concerned with user experience and context, here are a few examples of the ways in which I assess public art. Salud! by Dan Fontes on the facade of the Bethany Center in San Francisco is a fairly straightforward but visually impactful depiction of the sorts of activities that take place inside this senior center: 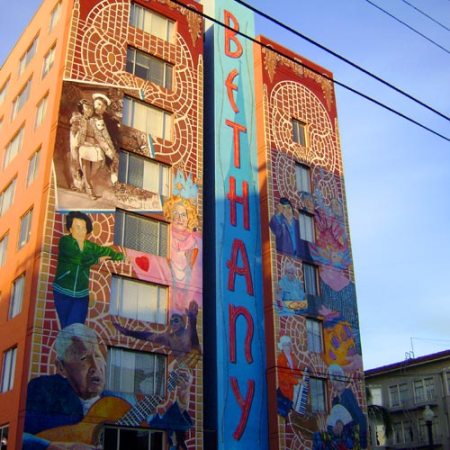 Located in a busy part of Covington, An Epic Tale of Time and Town by Christian Schmit has almost no impact at a distance. In a pedestrian-friendly neighborhood, this is highly effective, as the mural invites you to examine it closely to discover depictions of local landmarks interwoven with a multi-layered narrative that is part truth, part fiction:

Art in the public realm doesn’t have to be deeply meaningful or conceptually layered to be effective in its context. Rubber Duck by Florentijn Hofman, seen here installed in Rotterdam, is unabashedly silly. It does make clever use of its site, and it’s highly visible in its installation context:

But Paint the Street? If the goals were the community-wide painting experience and the press exposure, then I wish this had been a temporary artwork, made with chalk or something comparable. The documentation is already out there, and that’s what will be referenced in the ArtsWave’s next annual campaign. Ostensibly, the documentation is the only way in which a lot of people outside Cincinnati are seeing the painting. What’s gained by leaving the community with this?

19 thoughts on “Paint the Street by ArtsWave”