Actually, Google Maps claims that this is the corner of Roots Alley and an unnamed street, but I’m pretty sure it’s College and L’Hommedieu. Anyhoodle, check out this cheery blue awning! 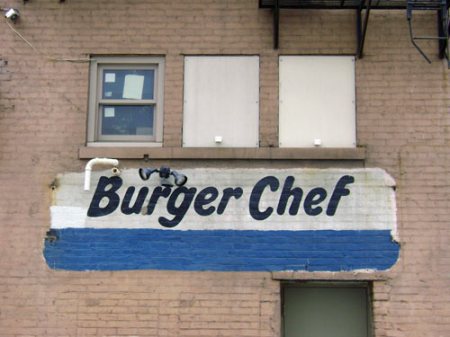 The Lyric Piano Co. Building is like an architectural mullet — it’s all graceful and distinguished in the front: 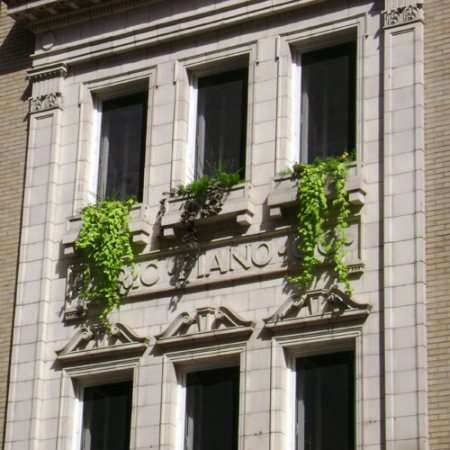 With ghost signs and awning simulacra in the back: 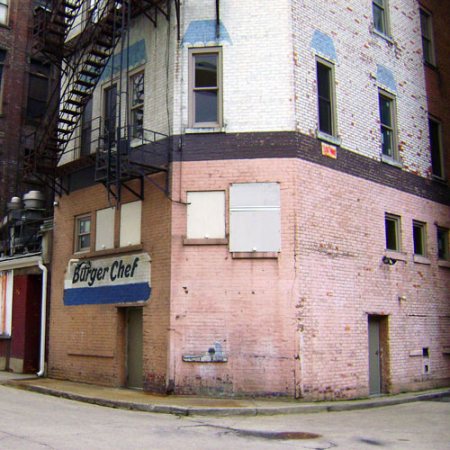 Here is a story on the building’s current owners, from three years ago. It mentions that the building previously housed a Hardee’s. Presumably, Burger Chef was sometime before then. But when did the awnings appear?

Sidenote: alleys are awesome. Using alleys as shortcuts and alternate routes was one of my favorite aspects of living in Indianapolis. My first apartment there was on the corner of 13th and Delaware but in the back of the building, overlooking a little alley called Hudson St.:

I never really had to do this, but I always wanted someone I didn’t want to see to ring my doorbell in the lobby, while I slipped out the back door, down the alley and across the grassy field toward the coffeeshop. “Oh, you stopped by? Too bad I missed you!”

I like walking down the alleys here in Cincinnati, checking out the backs of buildings and finding little gems like Burger Chef. It’s too bad that a lot of the downtown alleys have been filled in with big buildings, and a lot of alleys in Over-the-Rhine have been fenced off. The alley behind our building has become a kind of private dog-walking area — great for some, irrelevant for most.

In 1978, Grady Clay published an amazing, esoteric little book about this very subject, entitled Alleys: A Hidden Resource – Being a Disquisition Upon the Origins, Natural Disposition and Occurrences in the American Scene of Alleys, Together with Special Attention Being Given to Some Small Scale and Easily Completed Proposals for Their Improvement in Louisville, Jefferson County, Kentucky, Where They Constitute a Hidden Resource, Together with an Inquiry into the Disappearance of Alleys from Polite Society and Prospects for Their Future Rehabilitation. Sadly, Amazon truncated the title but, as I own a copy, I have faithfully transcribed it for you, my faithful reader. I highly recommend it for its lucid writing, practical ideas, and really cool book design with custom typography built from alley forms.

10 thoughts on “On the Corner of College and L’Hommedieu…”